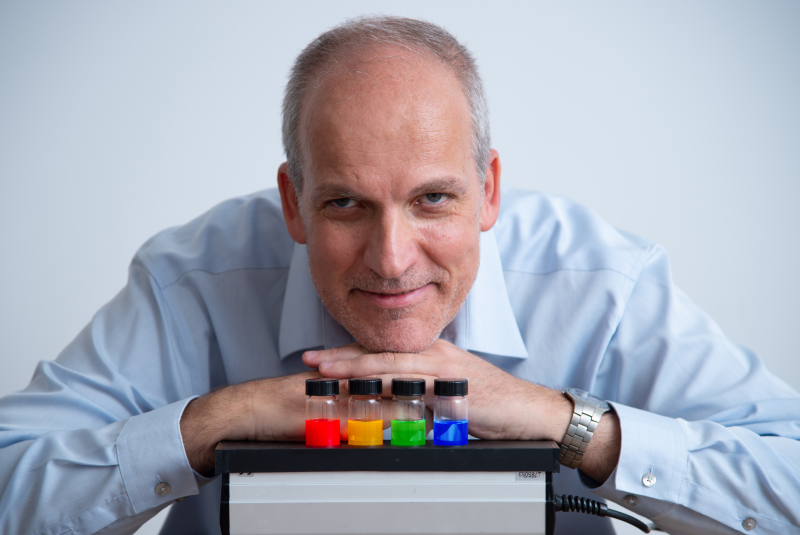 Prof. Uri Banin is a full professor in the Institute of Chemistry, and the incumbent of the Alfred & Erica Larisch Memorial Chair. He holds a double major B.Sc. degree in Chemistry and Physics, and received his PhD in Chemistry in 1994, all from the Hebrew University. He did his postdoctoral research at Paul Alivisatos’ group, at the University of California, Berkeley (1994-1997), as a Fulbright & Rothschild scholar, where he made his first acquaintance with Semiconductor Nanocrystals. He joined the Hebrew University of Jerusalem in 1997, where he studies the Science and Technology of Nanocrystals. Banin was the founding directior of the Hebrew University center for Nanoscience and Nanotechnology, leading it between 2001-2010.

Prof. Banin’s research interests are highly diverse and include both fundamental nanocrystal-science studies, such as nanocrystals synthesis and the characterization of their optical and electronic properties, as well as the development of applicative technologies based on the unique properties of nanocrystals, for solar energy harvesting, printed electronics, display, bio-imaging and bio-medical applications, 3D printing, and more. Special attention is given to II-VI and III-V semiconductors nanostructures of technological relevance, while examining the properties of a single nanostructure as well as their collective effects in assemblies.
“The high level of control of nanoparticle synthesis, combined with the deep understanding of their physico-chemical properties achieved in recent years, opened avenues for Nanocrystals Chemistry”, says Prof. Banin.  “In analogy to chemistry with atoms, nanoparticles can be referred to as ‘artificial atoms’, due to their quantum confinement–induced discrete-energy states. Hence, their chemical coupling will lead to the formation of ‘artificial molecules’, demonstrating new properties”. Recently, Prof. Banin’s group developed synthetic approaches for the controlled preparation of coupled nanocrystals fused homodimers (Figure 1), which demonstrate coupling effects already at room temperature. Using a soft template approach, the group was able to achieve unprecedented synthesis control over parameters dictating the extent of electronic coupling between both monomers, such as the inter-dot distance and the neck size in the fused dimer. The optical and electronic properties of these dimers are also studied in the Banin lab using both ensemble and single molecule spectroscopy in room and cryo-temperatures. “So far, we observed a change in both the absorption spectra and the exciton lifetime for the dimers compared with their monomer units. Those are associated with the hybridization of the electron states in the dimer, as well as with electron-hole Coulomb interactions and energy transfer processes. We are currently investigating the dimers with our newly constructed cryogenic single-nanocrystals spectroscopy setup, which will shed additional light on the changes in the electronic states upon dimerization”. The spectroscopic research in this area is tightly accompanied by model calculations of the expected coupling effects and their trends, and the understanding is fed back to the synthesis, to generate novel artificial nanocrystal molecules with tailored properties. 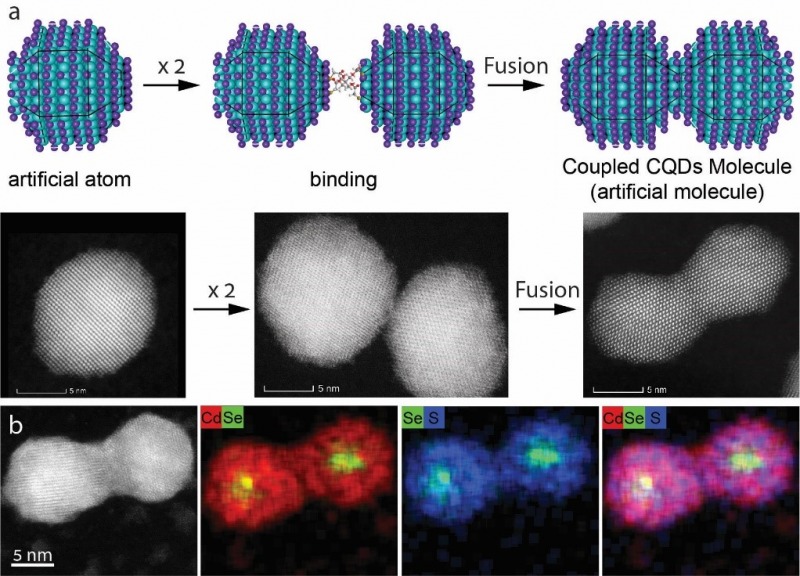 Figure 1. Artificial nanocrystasl molecules: The scheme for formation of a fused nanocrystal dimer is illustrated in frame (a). The core/shell nanocrystals are first linked by a molecular linker, and then fused to form a connected nanocrystals molecule. The elemental mapping in frame (b) clearly shows the two core/shells now fused into a dimeric structure.
It is important to note that the characterization facilities in the UNC are crucial for several aspects of this project. The structure and orientation relationship for the attachment and fusion processes of the colloidal quantum dot monomers were explored for the first time, via high angle annular dark field (HAADF) scanning transmission electron microscopy (STEM) using the newly purchased state of the art Titan-Themis system. The unprecedented resolution afforded by the Themis, combined with the detailed elemental analysis of the homodimers, allowed for the identification of a constrained oriented attachment mechanism of the monomers, in which both homo-plane and hetero-plane (misorientation) attachment relationships are observed upon fusion to form the nanocrystals molecule.
“As a future outcome, we foresee the formation of a diverse variety of coupled colloidal quantum dot molecules with outstanding promise for their utilization in numerous optoelectronic, sensing, and quantum technologies applications.” envisions Prof. Uri Banin.

Another important direction of research in the Banin lab concerns hybrid nanoparticles, composed of disparate elements such as metal and semiconductor, combined together onto a single nanosystem. Such systems manifest a unique model for the semiconductor-metal interface on the nanoscale and exhibit unique, synergistic electronic and optical properties. Perhaps the most impactful synergetic effect, is that of light induced charge separation. Namely, light absorption by the semiconductor component results in spatial charge separation and this is a basis for using nanoparticles in photocatalytic applications.
Photocatalysis, the use of light-harvesting to promote chemical reactions, is essential for diverse applications, ranging from the production of clean and sustainable fuel out of water (Figure 2), CO2 reduction, water and air purification, 2&3D printing, bacterial and antiviral disinfection, and more. The photocatalytic applications are challenging and present stringent requirements, including high turnover number, selectivity, stability, and environmental compatibility. The Banin group develops novel types of photocatalysts, studies the fundamental parameters affecting the photocatalytic efficiency and reaction specificity to reveal their mechanism of action, and also aims to apply the nanocrystals as photocatalysts in the abovementioned applications and others. 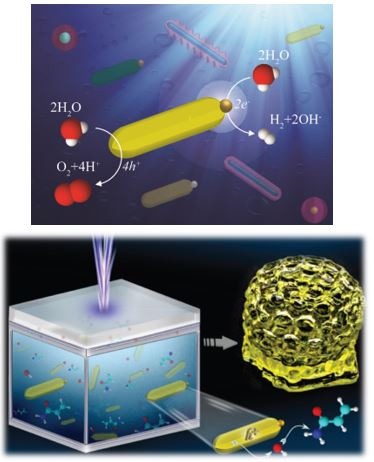 Figure 2. Photoctalysis with nanocrystals: Top: Extracting hydrogen fuel from water via sun light by a semiconductor-metal hybrid nanoparticle serving as a nano-photocatalyst. Bottom: Use of a photocatalytic nanoparticle as a new type of quantum photoinitator, QuantumPI, to create a 3D buckyball structure of a hydrogel through 3D printing in water.