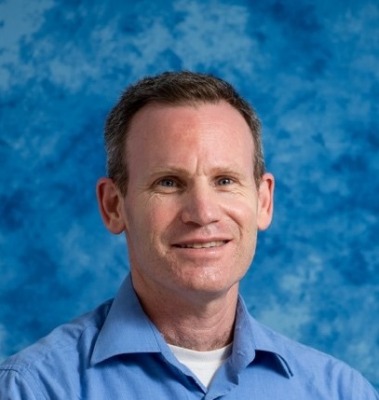 Hadar Steinberg is an associate professor at the Racah institute of physics. He completed his B.Sc. in mathematics and physics (1994) at the Talpiot program at the Hebrew University and an M.Sc. in astrophysics at Tel Aviv university (1999). He completed his Ph.D. in condensed matter physics at the Weizmann under the supervision of Prof. Amir Yacoby, specializing in low-temperature electronic transport. He worked two years as a post-doctoral fellow at the Hebrew University institute of Chemistry, under the supervision of Prof. Uri Banin and Prof. Oded Millo, focusing on electronic transport in nanometric quantum dots. He then moved to a post-doctoral position in MIT, working with Prof. Pablo Jarillo-Herrero on electronic transport in topological insulators. He is a faculty member at the Racah institute since 2013.

Hadar’s research involves the study of electronic and optics in atomically-thick two-dimensional (2D) materials. 2D layers are manufactured via the successive pealing (exfoliating) layered bulk materials into the single-layer constituents. These single, or few layer, flakes can then be identified, and placed in a variety of vertical combinations using a specialized stacking system. Such stacks may involve materials consisting of different physical phases – including conductors, semiconductors, insulators, superconductors, topological insulators magnets, and more. This is a robust technique, which gives rise to a vast range of experimental possibilities.

The Steinberg lab specializes in using this method for the fabrication of tunneling devices. In an ERC funded project, the group has developed a nano-fabrication method of devices which allow for high-precision, low-noise spectroscopy. They have carried out novel spectroscopic studies on a number of superconductors, and on graphene at the quantum Hall regime. A recent focus of the tunneling project is the superconductor NbSe2. NbSe2 is a material where superconductivity is retained down to the atomic thickness limit. In addition, it can sustain very high in-plane magnetic fields. Using tunneling spectroscopy, the Steinberg lab has mapped the spectrum of NbSe2 at the thick (> 20 nm) and thin (few atomic layer) limits, and have confirmed the stability of the superconducting gap of thin NbSe2 at high magnetic fields. 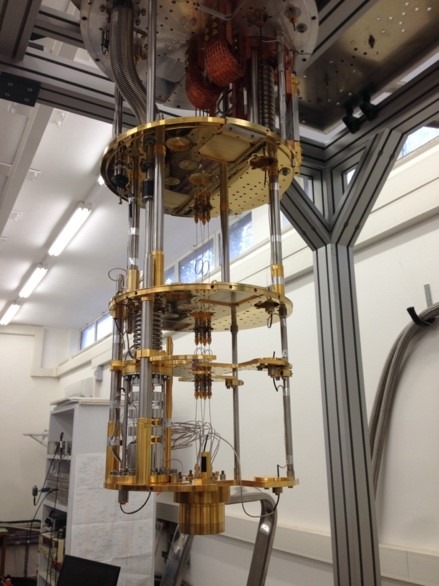 Tunneling measurements are taken at very low temperatures. The Steinberg lab operates a dilution cryostat, with base temperature of 25 mK. At such low temperatures, the tunneling devices become sensitive to delicate sub-gap excitations in the superconducting spectrum.  Superconducting tunnel devices based on layered (vdW) materials allow for very low background at low energies (“hard gap”). This makes it possible to carry out sensitive spectroscopy of excitations which appear at this energy range states. In a recent paper (Physical Review Letters, 123, 217003 (2019)) the group reported the measurements of Andreev bound states associated with the proximity of defect in the barrier, with the underlying superconductor. The observed excitations correspond to transitions between the BCS-like singlet ground state of the dot to a single-electron doublet state, in analogy with dots realized using nanowires. 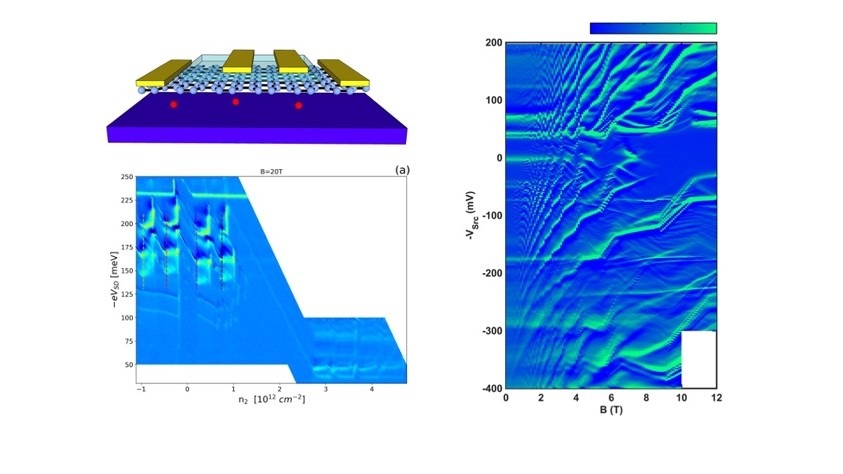 The Steinberg lab as recently published a ground-breaking paper demonstrating how a single atom, missing from the solid lattice, can serve as a high-precision probe of its surrounding. In a paper just accepted in Nature Communications, the group reported a study of a graphene device using such a so-called “defect dot”. The study involved the construction of a special electronic device, where electronic current injected into graphene is allowed to flow only through a single atomic defect which resides only 1 nm away from the graphene plane. Since defects host sharply defined energy spectra, the electron probes the presence, or absence, of electronic states in graphene at its exact energy.
Defect dots have very high charging energies, and can therefore only host a single electron. As a result, a dot cannot deflect local electric fields and, has a minimal effect on local interactions. These interactions, such as local electron-electron repulsion, are crucial in the formation of delicate quantum states which involve many particles. The graphene spectra, measured by the defect dot, have shown an intricate map of such delicate states which have hitherto been unseen. The defect dot is thus a highly useful probe, being at the same time energetically precise, atomically local, and allowing retention of delicate quantum states.